Rules of the game
About the Game

Data Monsters: Gather and Measure is a collectible card game for 2-4 players.

The game lasts 20-40 minutes depending on the number and experience of players, and the number of challenges in the challenge deck.

In this game, you lead an R&D lab equipped with a set of unique Monsters, Tools, and Hacks. The goal of the game is to collect more Big Data Points than your opponents by completing challenging software projects.

There are two types of decks in the game: Challenge Deck (blue back) and Laboratory Deck (green back).

The Challenge Deck is common for all players. Each player uses their own Laboratory Deck to play the game. 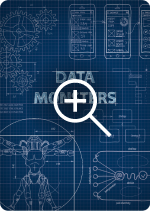 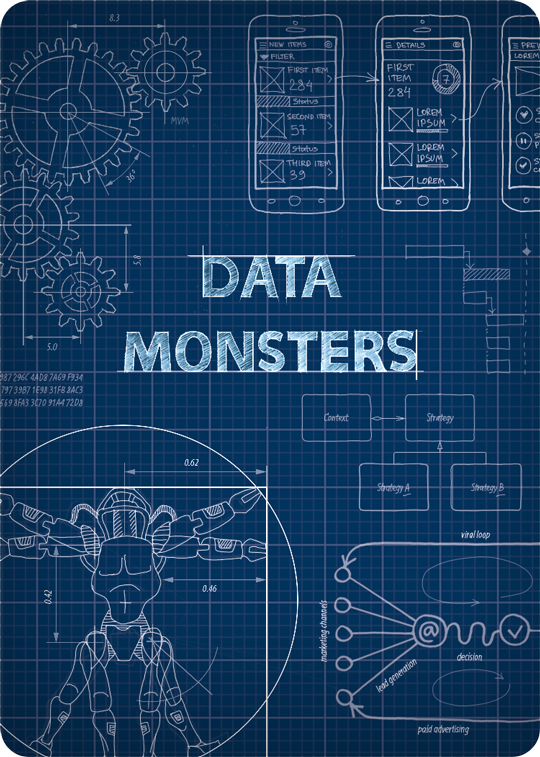 The Challenge Deck must be formed before the beginning of each game according to the following rules:

For a fast or a tutorial game, it’s recommended to use only 8 basic Challenge cards.

For a standard game, build the Challenge Deck, as shown below:

Put aside the other Challenge cards, you don’t need them in this game. 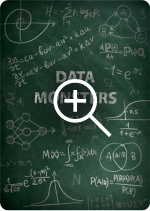 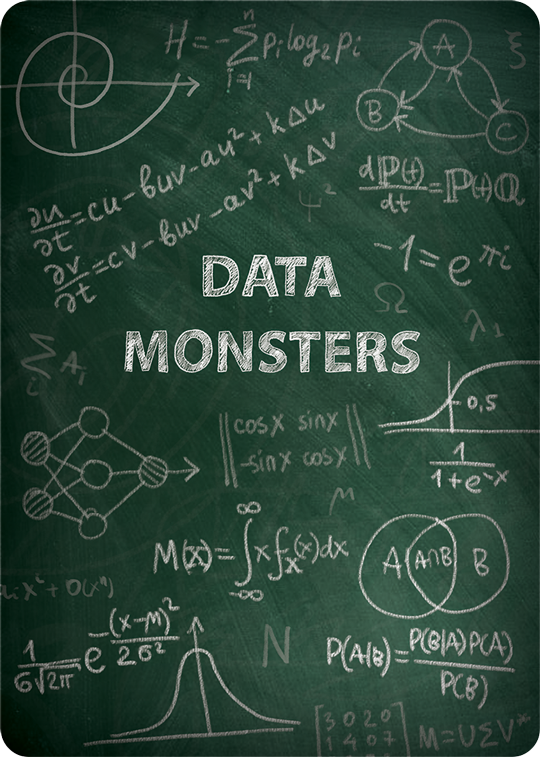 For beginners, it’s recommended to use the standard pre-built Laboratory Deck, distributed in Adventure Packs. 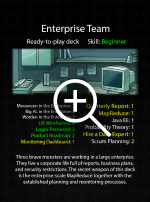 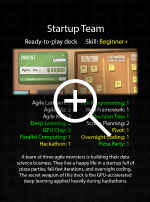 In further games, you can build your own Laboratory Deck according to these rules:

To start the game, shuffle your Laboratory Deck and put it in front of you face down.

Then, shuffle the Challenge Deck and put it face down in the middle of the table.

If you have 2 players in the game, take three cards from the top of the Challenge Deck and put them next to it in the Market zone.

In the case of 3 or 4 players in the game, the number of open cards in the Market zone is 4 and 5 open Challenges respectively. 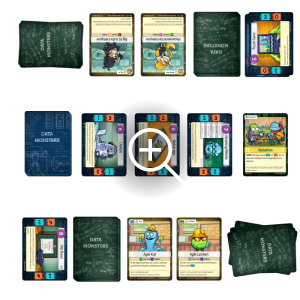 Each turn consists of 4 phases:

1. Beginning of the turn

The player draws 2 or 3 cards from the top of his or her Laboratory Deck:

At the end of the Draw Phase the player cannot have more than 6 cards in his or her Hand.

If the Laboratory Deck comes to an end, take all the cards from the Recycle Bin, shuffle them and put them on the table as your new Laboratory Deck. Thus, do not be afraid to discard unnecessary cards while playing, you will be able to use them later in the game.

You can play cards from your Hand or activate the abilities of the cards in your Lab in any order as you wish.

You may place Monsters on the table in the Lab zone from your Hand. Every Monster has two classes (e.g. Engineer and Designer, Scientist and Analyst). You may need to have Monsters with a relevant class in your Lab to play some powerful Tools and Hacks.

Most Monsters have a permanent effect or an ability that can be activated.

Each player can have only one copy of each Monster in the Lab zone. If you place a new Monster with the same name (e.g. Krol) that is already in your Lab, you must choose which of these two cards stays, and which goes into the Recycle Bin.

Monsters are graded in 3 levels: Junior, Senior, Chief. To place a Senior Monster in your Lab you must have a Junior Monster with the same name in your Lab already. In this case, the new Monster replaces the old one in your Lab, while the latter is discarded to the Recycle Bin. The same goes for replacing a Senior Monster with a Chief Monster. Уou can also degrade your Monsters, i.e. replace a higher level one with the same or lower level. Typically you would not do that, as higher levels are more powerful, but you may want to do so to play some cards or use specific abilities. 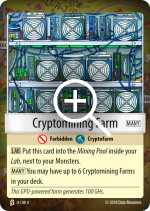 Lab Equipment cards marked with lab may also be placed in the Lab zone. These cards can unlock the abilities of the Tools or add extra points or buffs. 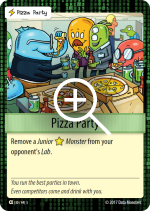 Hacks provide instant effects and then must be put into the Recycle Bin.

interrupt - this type of hacks can act immediately when a specific game event occurs, even during another player’s turn. Once the described event happens while the card is in the player’s Hand, he or she may literally interrupt the game, play the hack, and let the game continue. 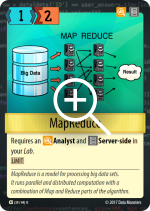 These cards help to win Challenges, providing you with Technology (TECH) and Science (SCI) points.

In order to win Challenges in the Market, you start building your software by playing one or several Tool cards one by one. 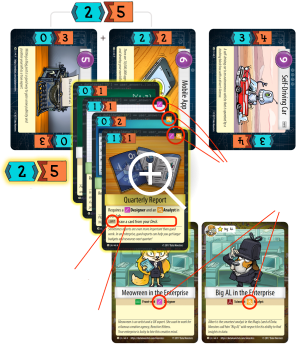 When you’ve completed your Software Build, discard all the Tools you’ve played face-down to your Recycle Bin, and add all completed Challenge cards face-up to your Ranking. By doing so, you gather Big Data Points that eventually define who wins the game.

Some Tool cards have additional effects besides adding TECH and SCI to the Software Build. This effect is activated right after the Tool is played.

It’s up to you when to finish your Action Phase, but try to keep the game vibrant. Act fast - don’t spend too much time on decisions.

component – the Tool may be played in combination with other tools to get an extra effect.

stack – this Tool card has a recipe of several components that must be played together with the card in order to get the described effect.

At the end of each turn, the player performs the actions marked “At the end of your turn” for the cards in the Lab zone.

Each player completes all the phases in his or her turn, and then the turn for the next player begins.

End of the game and determination of the winner

As soon as the last Challenge is won (meaning there are no more Challenges in the Challenge Deck), the game ends immediately.

All players calculate how many Big Data Points they gathered, and measure their Rankings against each other. 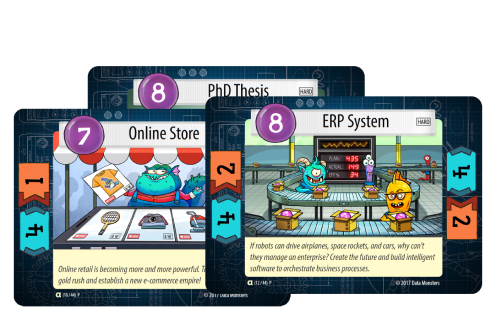 The winner is the player who has more Big Data Points than others. He says: “My data is bigger than yours! Thanks for the game!”

If it’s a tie, the winner is the player who has won the most difficult Challenge (the Challenge that has the highest number of Big Data Points).

The Office version of the game

You may want to play the game in your office with your friends. In this case, you don’t need all players to have their individual Laboratory Decks in order to play. You may assemble one large Laboratory Deck for your office and play together.

The easiest way to create a Large Laboratory Deck for your office is to combine 2 similar standard Adventure Packs with the other 2 similar standard Adventure Packs, (e.g. two packs of Data Monsters Running a Startup with two packs of Data Monsters Working for the Enterprise, four packs total) and remove superfluous copies (e.g. 4 copies of Scrum Planning)

We recommend to follow these rules to do so:

With this Office version of the game, you’ll definitely have a lot of fun! 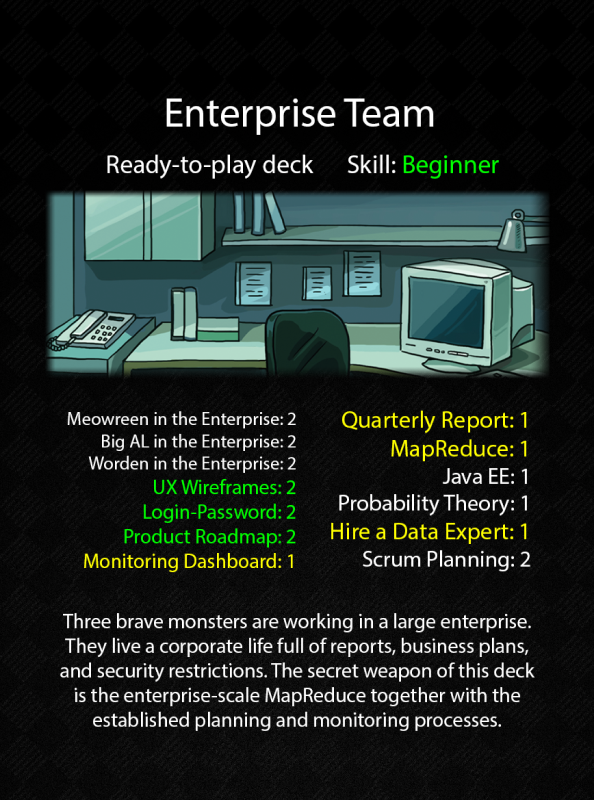 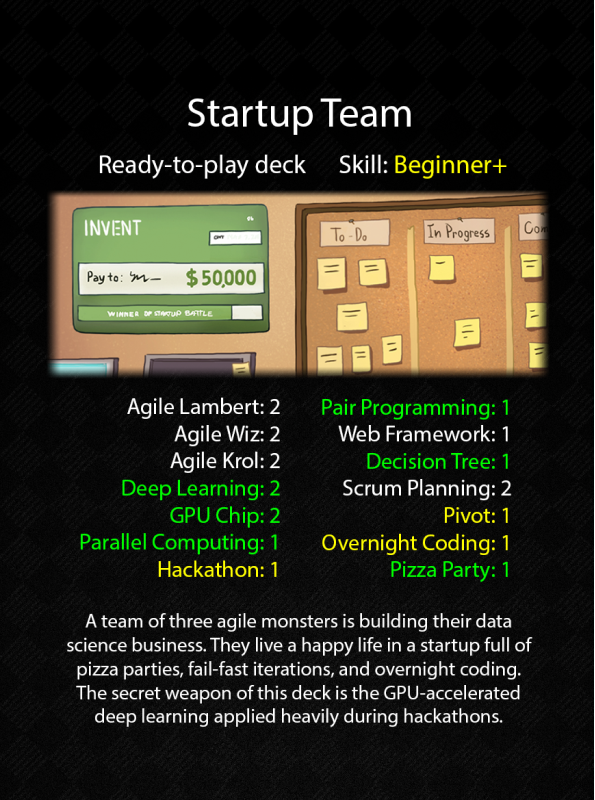 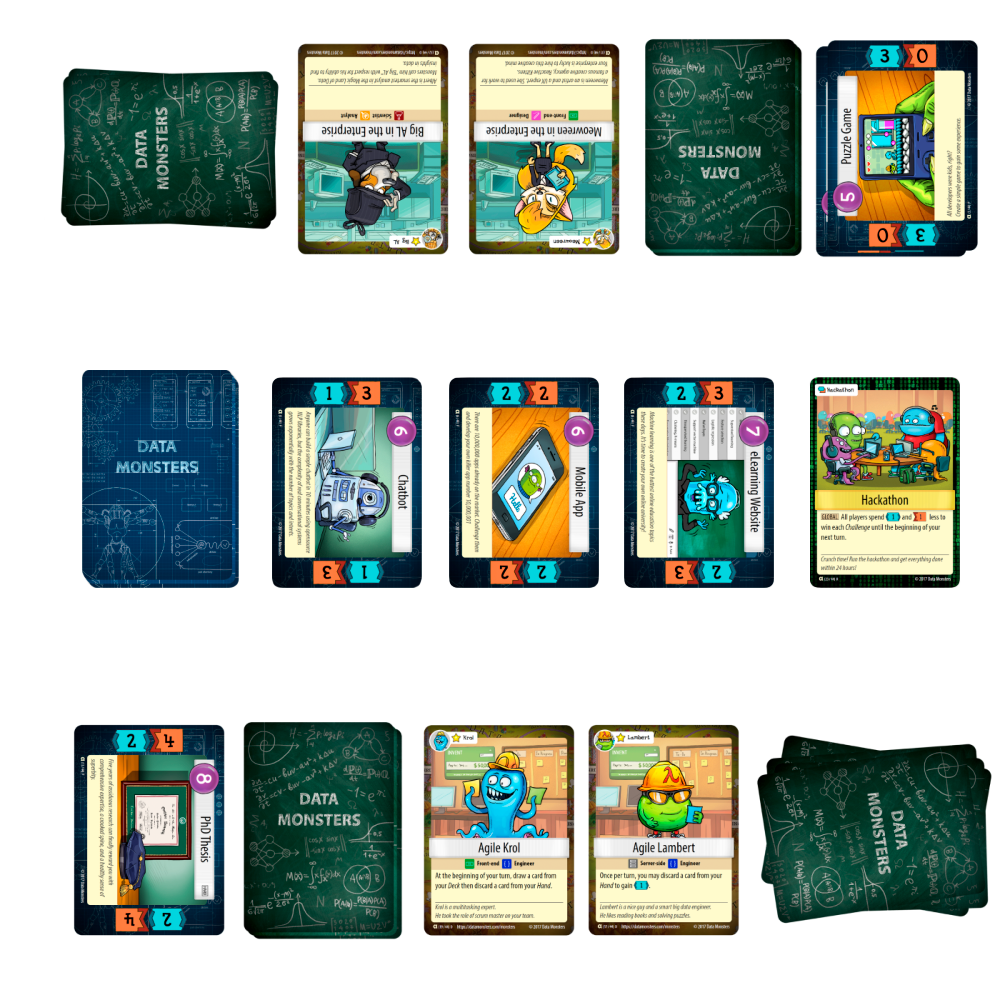 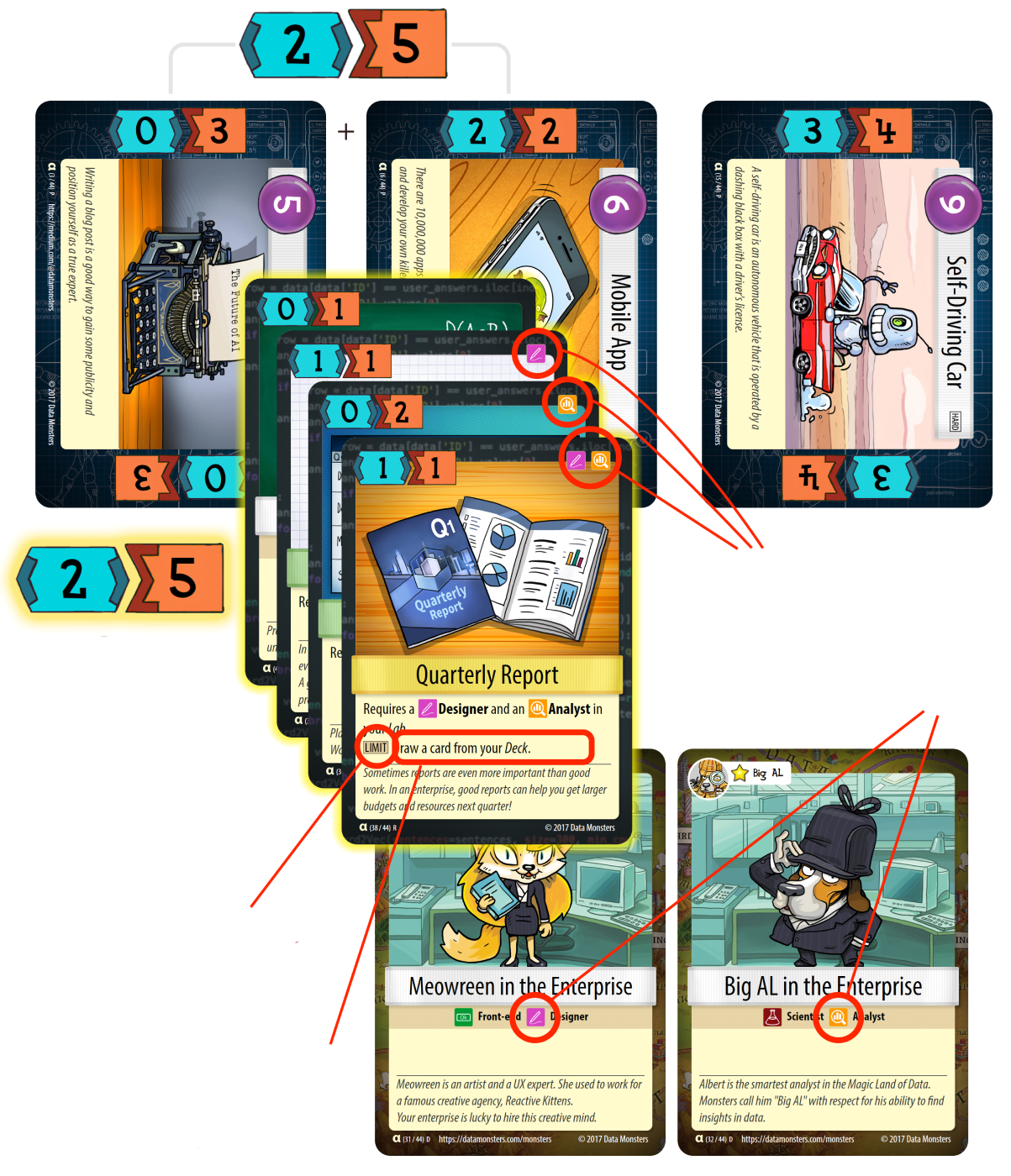 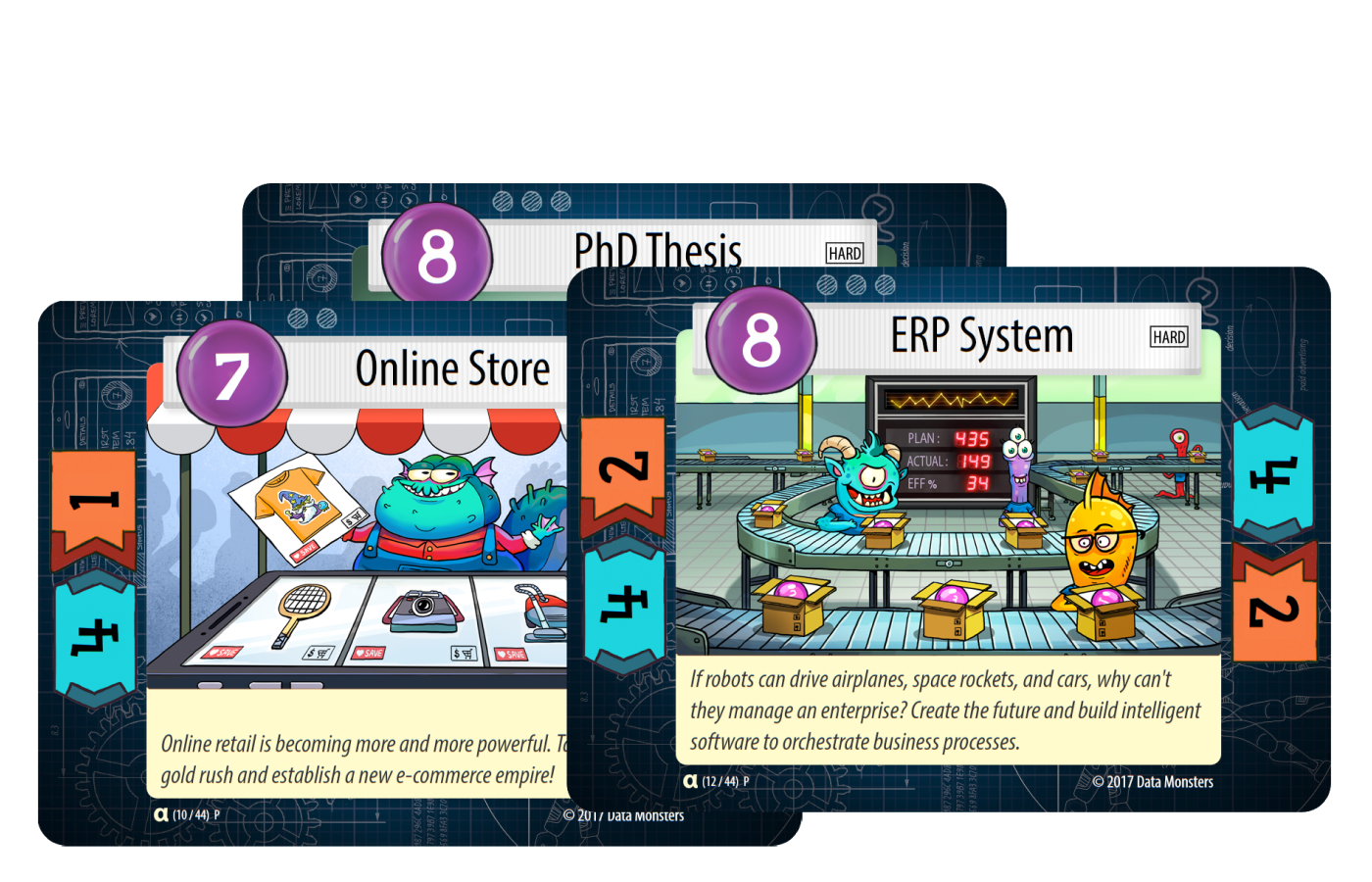